Kendrapara : Several Journalists of the district today held a demonstration in front of the Collectorate here demanding action against a lady Constable for assaulting a web media reporter.
The media persons demanded the District Collector to place the lady Constable under suspension,
file a criminal case against her and to take action against her for not wearing masks while on duty.
The Constable allegedly slapped and abused the reporter yesterday while he took a photograph
of her not wearing a mask while on duty violating the covid protocols.
The Journalists under the banner District Working Journalists Association in a memorandum submitted to Chief Minister Naveen Patnaik through the district collector demanded justice for
the media people.
The Reporters threatened to intensify their agitation if their demands were not met.
The media people also locked the main gate of the Collector’s office and detained all the five
MLAs of the district for a brief period who came here to participate in a conference.
The MLAs were allowed to go after they assured to take up the matter with the district collector
and SP of Kendrapada for taking action against the lady Constable.
Sources said Bhimasen Sethy, the Reporter was assaulted after he clicked the photograph of
Pinu Nayak, the lady Constable who was on duty not wearing a mask and put it on his social
media site.
Fuming over the issue the lady constable manhandled him and later slapped him in presence
of police personnel and senior BJP leaders of the district who were agitating there.
Meanwhile, the district collector, Amrut Rituraj, said he would form a committee to probe the
incident.
The victim also lodged an FIR at Kendrapara Sadar police station on the alleged matter.
IG of Police (CR) Narasingh Bhol also said he would conduct an inquiry to ascertain the
veracity of the allegation and would take steps..
Sagar Kumar Jena, a human rights activist, prayed to NHRC to direct the Chief Secretary to
collect a penalty of Rs two lakh from the Constable and pay it to the reporter as compensation
and asked the SP to initiate action against the lady constable. 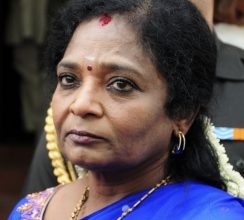 Mystery Behind Deaths of 4 women due to botched-up FP surgery unacceptable: T’gana Guv