New Delhi, May 23: A video surfaced on social media a day ago, in which a young man was showing swag and balancing himself on two moving SUVs on a Noida road. The 21 year old Rajeev, had never ever thought of this consequences for his late night dangerous stunt shows.

The Gautam Buddh Nagar Police announced on Sunday that they have arrested Rajeev of Sorakha village, prompting the sector 113 police to take action against him under the Motor Vehicles Act.

The vehicles used in stunts were seized as well,” Police Commissionerate, Gautam Buddh Nagar, informed on its Twitter handle.

The officer further informed two Toyota Fortuners were used for the stunts, one of which belongs to Rajeev’s family, while he hired the other from a relative. The bike, too, belongs to the accused’s family, he said.

According to the SHO Rajeev belongs to a well-to-do family and he used to make the video for social media only.

For the unversed, Bollywood actor Ajay Devgn, in his 1991 debut film ‘Phool aur Kaante,’ performed a stunt which saw him balance himself on two moving motorcycles. In his 2010 film ‘Golmaal Returns,’ Devgan performed the similar stunt with two cars.

Infant's Body Being Scratched By Dogs Found In Shimla 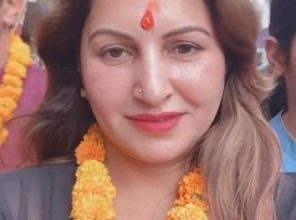