Khatkar Kalan (Punjab), March 16 : Comedian-turned-political activist Bhagwant Singh Mann on Wednesday took oath as the 17 Chief Minister of Punjab at the head of an Aam Aadmi Party (AAP) government — just six days after the party won a landslide in assembly elections. Prime Minister Narendra Modi joined several political leaders from across the country in greeting Mann, 48, who took the oath of office and secrecy administered by Governor Banwarilal Purohit on a raised platform not far from a memorial to revolutionary Bhagat Singh. As tens of thousands of men and women sporting yellow turbans or ‘chunni’ cheered him, Mann, in a brief speech in Punjabi, vowed to implement all the promises made by the AAP during the elections and turn Punjab into a modern welfare state. He also urged AAP legislators and activists to shun pride and to work for everyone, including those who did not vote for their party. Only Mann took oath on Wednesday. Party sources said his cabinet, which can have 17 members, would be constituted soon. “Congratulations to Bhagwant Mannji on taking oath as Punjab Chief Minister,” Modi tweeted. “Will work together for the growth of Punjab and welfare of the state’s people.” AAP founder leader and Delhi Chief Minister Arvind Kejriwal, who sat on one side of the stage along with his Deputy Manish Sisodia and other Ministers from the national capital, was among the first to congratulate Mann. “Many many congratulations and best wishes to Bhagwant Mann on becoming the Chief Minister of Punjab,” he tweeted.

“I am sure that under your leadership, prosperity will return to Punjab, there will be a lot of progress and people’s problems will be solved. God is with you.” Samajwadi Party leader Akhilesh Yadav and Tamil Nadu Chief Minister M K Stalin also hailed Mann. “Infinite congratulations and best wishes to the newly elected Chief Minister of Punjab, Bhagwant Mannji,” Yadav said. “It is hoped that under his able leadership, the crops of progress, brotherhood and new outlook will flourish in Punjab.” Stalin added: “My hearty wishes to Bhagwant Mann… Tamil Nadu and Punjab share a long history of being vocal about linguistic rights and rights of the state in the Indian Union. Wishing the new government in Punjab, a successful tenure.” BJP leader and Madhya Pradesh Chief Minister Shivraj Singh Chouhan tweeted: “Congratulations and best wishes on taking oath as the Chief Minister of Punjab.” Congress MP Manish Tewari, who was invited to the event, expressed his inability to attend as Parliament is in session. But he added: “It is ironic I was not invited to (former Chief Minister) Charanjit Channi’s swearing in though he was one of my MLAs.” Punjabi singer Gurdas Mann told the media that the AAP winning a whopping 92 of the 117 seats in the Punjab Assembly was “just a beginning. Their (AAP) ideology is special. I pray that God gives them (AAP) courage to make a prosperous Punjab”. Mann, who considers himself a follower of Bhagat Singh, also wore a yellow turban — a colour made popular by the famed revolutionary — and decided to take the oath of office in Bhagat Singh’s ancestral village. Bhagat Singh was hanged on March 23, 1931 at Lahore, now in Pakistan. After paying compensation to farmers, the authorities cut down a large area of crop land here to construct the stage as well as a wide and open area where vehicles could be parked and people could be seated. Many started to reach the venue a day earlier. On Wednesday, AAP activists served food to visitors on the route to Khatkar Kalan, which is located just outside Banga town in Shahid Bhaga Singh Nagar district. One of the newly elected AAP MLAs cycled all the way to Khatkar Kalan, frequently stopping as people sought selfies with him. The AAP, which emerged as the main opposition five years earlier, swept aside all opposition in the February 20 elections, leading to the unprecedented defeats of all former Chief Ministers as well as the best known names in Punjab politics. 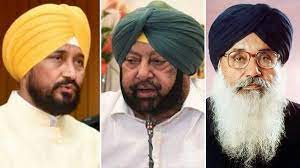