New Delhi, July 16 : 2021 has been a whirlwind of a year for Glan Martins. The midfielder’s footballing talents have seen his stock skyrocket ever since he started donning the FC Goa colours in February.
Ever since switching over to the Gaurs in the late hours of the January transfer window, the midfielder has put nearly all his steps right.
Proving to be an impediment for the opposition all over the park? Check. Pressing high up the pitch to steal the ball and set up a goal in a crucial game that ensured playoff qualification? Check. Scoring an absolute blinder of a goal from 35 odd yards out against one of the best keepers in India? Check. Get a national call up? Check.
All this has resulted in FC Goa furnishing a new three-year deal to keep the Velsao native in the orange of the Club till 2024.
His calm touches of the ball at the centre of the park combined with his feisty attitude and what seems like a limitless reservoir of energy to traverse every blade of grass on the pitch have made him invaluable to the FC Goa cause.
Football, though, for Glan Martins has been more than his acclaim to fame. It has been the chisel that has helped him shape his life.
“This game has been a sort of blessing for me, I feel,” Glan elaborated. “It has helped me become the person I am today. Not the player that you see on the field, but the person that I am within. Even my mother and father are surprised as to how I have turned out to be.”
In his formative years, it wasn’t always the case.
“I had four siblings growing up. And I was a bit awkward socially. I think I still am, a bit,” Glan chuckles while saying. “I was very short-tempered. I mean very. I didn’t have quirky retorts to most things and that led to anger building up within me. And I feel I didn’t really know how to get that out.
“I would run away into the fields and stay there for hours. If it got really bad, a fight would ensue within the house. I really can’t recognise that kid.”
That all changed in 2010 when Glan got the opportunity to play for SESA Academy’s U18 side.
“I think that move changed my life. I started staying away from my family. I started to meet new people. It was a whole new world for me,” the 27-year-old remembers.
“It was an eye-opening experience. All the things that I had taken for granted were taken away. I had to take care of myself.”
Whilst dealing with the newness of the whole situation, Glan had the help of an old friend. One who he knew, one who he loved and respected. One that had brought him to this place. Football.
“I think I started enjoying my football there. My worries would disappear when I would get on to the pitch with a ball at my feet. I started playing well and got promoted within a year to the main team,” Glan added further.
“Football became a true source of happiness for me. The game itself, the people that the game brought into my life brought me peace of mind. I will forever be grateful for that.”
UNI Neeraj Chopra To Miss CWG Due To Injury 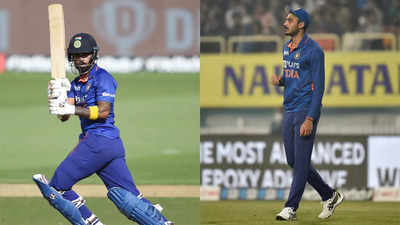 Rahul, Axar Ruled Out Of T20Is Vs WI