New Delhi, Jul 19 : Prime Minister Narendra Modi on Monday said that the opposition cannot see that women, Dalits, and people coming from the backward communities have become ministers. Speaking in Lok Sabha amid disruptions by the opposition MPs, the PM said that he was expecting members of the House to show enthusiasm by thumping their desks as a large number of those from the Dalits, Scheduled Tribes and OBC communities as well as sons of farmers and those from economically backward and rural backgrounds have become ministers in the recent rejig.”However, probably, some people did not like that people of such a background have become ministers and that is why they are now conducting themselves with such behaviour,” he said and appealed to the Speaker to consider introduction of the ministers with the submission of their list to the House.
Advertisement

Responding to the Prime Minister’s appeal, the Speaker announced that the House had accepted the introduction of the ministers.In the Rajya Sabha as well, the Prime Minister could not introduce his newly-inducted Union Ministers as several slogan-shouting opposition members trooped into the well of the House to protest over various issues.PM Modi said that when the new Union Ministers belonging to rural background and children of the farming community were being introduced to the House, some opposition party members were not happy. He said a large number of women, Dalit and those belonging to scheduled tribes have been made union ministers, but some opposition members do not want to hear their names and give them the due honour.”What is this mentality?,” he wondered. The Prime Minister further said it was for the first time that the House was witnessing “such a mentality”.Criticising the Opposition for not allowing the Prime Minister to introduce the new ministers, Defence Minister Rajnath Singh said such a thing was happening for the first time in his 24 years of parliamentary career.
Advertisement

“The strength of Parliament is in maintaining healthy traditions. Both the Opposition and Treasury should maintain healthy traditions. Even if one or 50 new ministers are inducted, the whole House listens to their introduction by the Prime Minister with decorum… This is sad, unfortunate and an unhealthy approach,” Singh, who is also the Deputy Leader of Lok Sabha, said 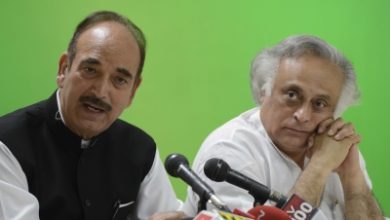 Azad On His Way To BJP! ‘Azad Justifying Treachery Every Minute’ Jairam