New Delhi, Jul 9 : The Supreme Court is scheduled to hear on July 16 the Centre’s plea seeking transfer of petitions challenging the constitutional validity of the new Information Technology (IT) Rules from different high courts to the apex court.

A bench comprising Justices AM Khanwilkar and Sanjiv Khanna said the plea will be heard along with a pending matter related to regulating Over The Top (OTT) platforms and tagged the Centre’s plea with a pending special leave petition (SLP).During the hearing, Solicitor General Tushar Mehta requested the Court that proceedings pending in the high courts be stayed.However, the bench said, “We’re not saying anything. We’re simply tagging it with the other matter.”

The Central government had moved the top court for transfer of all petitions to the Supreme Court citing multiplicity of proceedings.The transfer plea was filed in April after several pleas were filed in HCs including Delhi, Bombay, Madras, and Kerala High Courts challenging the validity of the said Information Technology (Intermediary Guidelines and Digital Media Ethics Code) Rules, 2021.It is worthwhile to note that various issues have been pointed out with the new IT rules such as restriction of free speech, requirements such as automatic identification and removal of content, and lack of elaboration on how the five million users will be calculated.

Immediately following the publication of the rules, several platforms advised creators of caution based on the new rules.Petitions have been filed in various HCs challenging the rules concerning digital news media. 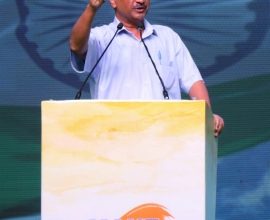 Delhi CM Kejriwal To Launch ‘Make India No. 1’ Campaign From Haryana On Wednesday